Customize a Nicholas Brendon inspired pendant into a necklace, bracelet, earrings, keychain, or decoration! Feature your favorite charms inspired by him with beads in up to 3 accent colors. Customize Customize everything, start to finish, its that easy.

Charms are included in cost of customization.

Customize a Nicholas Brendon inspired pendant into a necklace, bracelet, earrings, keychain, or decoration! Feature your favorite charms inspired by him with beads in up to 3 accent colors. Customize everything, start to finish, its that easy.

Custom Pedants can take 3-5 days to assemble before shipping. You may upgrade assembly with Speedy Hands to have your item completed in 1-2 days. You may also choose to upgrade it’s Delivery Options or have your item Gift Wrapped with included Message! If you’d like to customize a Buffy inspired Xander Harris pendant instead, click here. 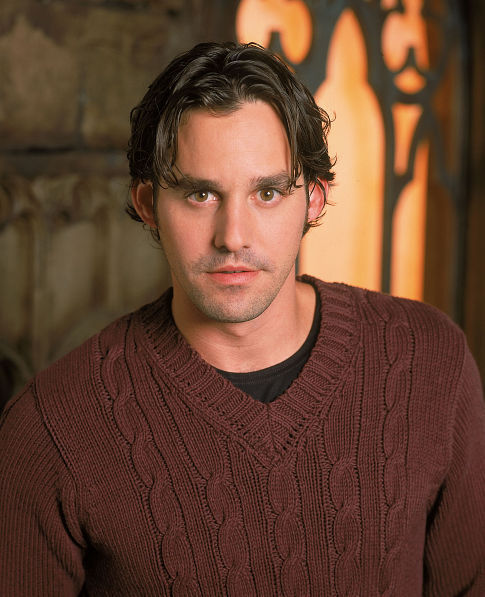 Best known as “Xander Harris” in Buffy the Vampire Slayer

Nicholas Brendon is an American Actor best known for his roll as Xander Harris on the cult television show “Buffy the Vampire Slayer” and Kevin Lynch on “Criminal Minds”. His favorite off screen passions include painting, photography, and writing. In March of 2019 Nicky discovered painting. He mostly uses acrylic paint (for travel cleanup reasons) however has worked with other mediums and has some artwork merchandise up for sale. Nicholas has grown quite the collection of poetry, short films, photographs, multi-media artwork and more while traveling in 2018 & 2019 during his Kicking Depression in the Ballsack tour and Happiness Runs Amok… Because I Give Amok Tour.

At Nicholas Brendon’s meet & greets he met with his fans, along with their friends and family members. Amongst the throngs of lovely humans he met, he was honored to be introduced to many Xanders. His mindful mental health meetings included: Bowling, Karaoke, Facebook Live Events*, and Watch Parties. He hugged his way across the United States, England, Ireland, France, and Italy. Between sharing his stories and truths about mental illness to asking questions, laughing with, accompanying, taking selfies, signing autographs, loving and caring he made a difference. So much so Nicholas was recognized as a Mental Health Hero by The Mighty for 2018.

Nicholas in fact has been meeting and hugging his fans since 2004! Nicky now has 4 discussion groups on Facebook. The first group to give his fans a place for community and support,Nicholas Brendon Discussion. Then the newest, Nicholas Brendon Mental Health Advocate group which is partnered with Speaking to the Heart,The Podcast Network.

In mid 2019, N. Brendon gained a German Shepherd Service Dog side-kick,Miss Green. He also once had a beloved buddy named Steve. Also a German Shepherd named Steve, whom he lost in 2018. Find out more about Nicholas Brendon and check out a full list of all shows, movies, and games he’s appeared or worked on. You may also find his works on the canonical comic book series “Buffy the Vampire Slayer: Season Ten, Vol. 1” (co-authored by Nicholas) which reached the New York Times Best Seller List on Amazon.

*Live Facebook events, Car-a-okes (singing to his favorite songs), and watching his favorite episodes with fans.

There are no reviews yet.